With the overwhelming amount of deaths from opioid overdose rising steeply, and a large segment of the population reporting knowing someone who is currently or has previously been addicted to a prescription painkiller.  The rise of the opioid crisis may come as no surprise, now affecting people across the united states within all incomes, ages, and regions. Statistics show about (4/10) four in ten individuals addicted to opioids are covered by private health insurance and Medicaid.

Currently private insurance covers nearly 4 in 10 non-elderly adults with an opioid addiction in the United States.

“In this analysis and a corresponding chart collection, we use claims data from large employers to examine how the opioid crisis has affected people with large employer coverage, including employees and their dependents. The analysis is based on a sample of health benefit claims from the Truven MarketScan Commercial Claims and Encounters Database, which we used to calculate the amounts paid by insurance and out-of-pocket on prescription drugs from 2004 to 2016. We use a sample of between 1.2 and 19.8 million enrollees per year to analyze the change from 2004 to 2016 in opioid-related spending and utilization.

We find that opioid prescription use and spending among people with large employer coverage increased for several years before reaching a peak in 2009. Since then, use of and spending on prescription opioids in this population has tapered off and is at even lower levels than it had been more than a decade ago. The drop-off in opioid prescribing frequency since 2009 is seen across people with diagnoses in all major disease categories, including cancer, but the drop-off is pronounced among people with complications from pregnancy or birth, musculoskeletal conditions, and injuries.

Meanwhile, though, the cost of treating opioid addiction and overdose – stemming from both prescription and illicit drug use – among people with large employer coverage has increased sharply, rising to $2.6 billion in 2016 from $0.3 billion 12 years earlier, a more than nine-fold increase.” from Cynthia Cox, Matthew Rae and Bradley Sawyer on Kaiser Family Foundation.

Todays trends across the board with prescription opioid “use & spending” among people with employer coverage.

Among people with employer health coverage in the united states, many found older enrollees are more likely to retain an opioid prescription. 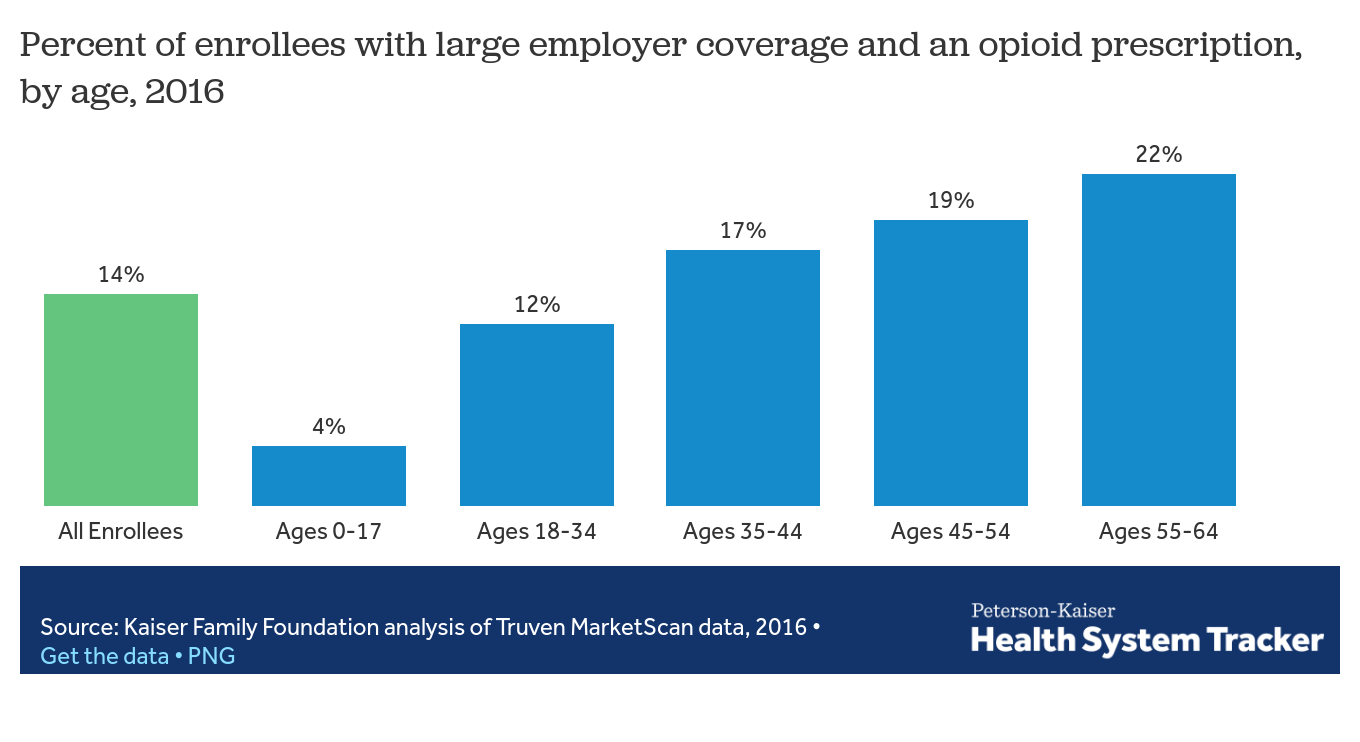